Ancient stellar flow may be "window" to the Milky Way's past 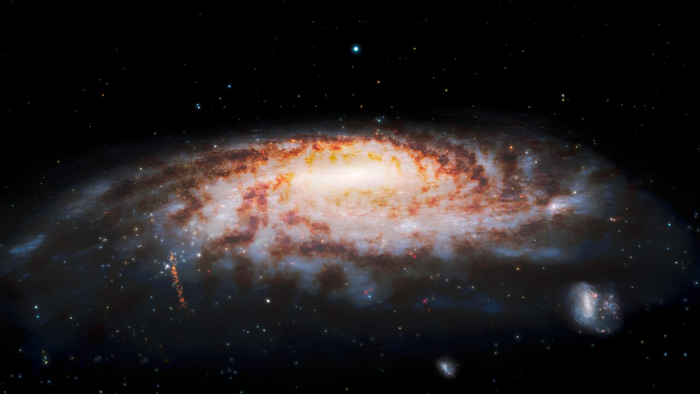 A primordial stellar flux in the most distant regions of the Milky Way was discovered by an international team of researchers. Formed by stars torn from an ancient star cluster, this flux has a lower proportion of heavy elements compared to any other star system in our galaxy, and may represent a relic of the Milky Way's “childhood”.

Stellar fluxes are formed by stars that were part of globular clusters or dwarf galaxies. However, due to perturbations of gravitational interactions, they have grouped into these fluxes, which extend through the cluster's original orbit. Called "C-19", the flow discovered by the team lies in the southern spiral of the Milky Way. Its orbit extends about 20,000 years from the galactic center at the closest, reaching 90,000 light-years at the farthest.

Using data from the Gemini North telescope and the GRACES instrument, the researchers found that the C-19 is the remains of a globular cluster (a spherical group of stars). In addition, flux stars have low metallicity, that is, a low proportion of heavy elements—the proportion is the lowest ever observed in or around a Milky Way star system.

This discovery has some implications for the formation of stars, star clusters and galaxies in the early universe and our galaxy. The very existence of the flux proves that globular clusters and the first forming blocks of the Milky Way must have been able to form in environments of low metallicity, that is, before successive generations of stars filled the universe with heavier elements.

Nicolas Martin, lead author of the study, points out that it was not known whether globular clusters, with so few heavy elements, could exist. "Other theories suggest that they would have had to have disappeared a long time ago, which makes this discovery essential for us to understand how stars formed in the early universe," he explained.

Data from the Gemini telescope suggest that the cluster formed in one of the first generations of stars, making C-19 a great relic of the period when the first stellar groups formed. “While astronomers can look at the most distant galaxies to study the early universe, we now know that we can study the oldest structures in our galaxy as fossils from these remote times,” concluded Julio Navarro, co-author of the study.

The article with the results of the study was published in the journal Nature.